Lifelines – Tested & Certified or just a false sense of security? 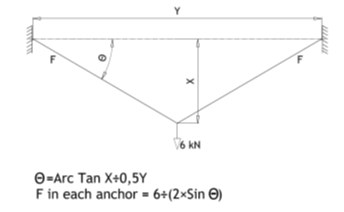 Are you sure your lifelines are tested and certified or do you have a false sense of security? The design of lifelines is normally beyond the scope of competence of a professionally designated Rope Access Supervisor or a Fall Protection Supervisor / Planner. All the available literature on this subject states that the design of lifelines falls within the scope of competence of “a qualified engineer” See SANS50795:1996

The intent of this blog is to create an awareness for the complexity of some of the issues and variables that play a role in these systems.

Fixing a flexible horizontal safety line between two anchor points and subjecting it to point loads is the basic concept.

Issues to be considered include but are not limited to:

What is a sag angle? It is the angle created between a horizontal line drawn between the end anchor points and the lifeline when subjected to a point load – see Figure 2

For the purpose of this exercise, we will Ignore any load absorbing/ energy dissipating devices and assume the tension forces are transferred onto the end anchor points.

Based on the mandatory design force of 6kN (as per EN795 / EN355), the tension in a line rigged between two anchors can be calculated if the required variables are known.

Table 1 below shows how the forces increase exponentially as the sag angle decreases.

This table excludes other factors such as pre-tensioning, vibrations, elastic oscillations and any other force that could influence the system.  All lifelines must be designed by competent persons such as professional engineers to ensure that all factors are taken into consideration including breaking force of the rope, pull-out resistance of chemical anchors, concrete beam / column strength, number of persons allowed per line and a lot of the parameters listed above under sub-heading “issues to be considered”.

To comply with SANS50795:1996 “the minimum breaking strength of the rope shall be at least twice the maximum calculated line tension”.

Therefore, based on the simplified calculations shown above in the case of a 5º sag angle, the rope needs to have a breaking strength of more than 68kN anchored to the structure with at least M24 chemical anchors.

If M24 anchors and high strength steel wire rope cannot be accommodated, then the sag angle must be allowed to increase and the only way to do that is by employing energy devices that elongate or lines that can elongate under these forces.

These forces are based on only one person’s fall being arrested by the system at any one time.

The formulae to determine basic tension forces (excluding all the factors mentioned above) is shown on figure 2 below.

It can be seen from table 1 above that if a steel wire rope of diameter 8mm is used as a temporary lifeline and assuming that the anchors and the structure to which the anchors are fixed are strong enough, the wire rope, typically certified with a minimum breaking strength of 32kN ( 3,2 Ton!  ) will fail if it is pulled so tight as to try and reduce the sag angle to 5 degrees! And this ignores the “Factor of Safety” as required in the standard.

To calculate the actual tension force, we need to consider the pre-tension force first. This is the amount of tension in the rope to reduce excessive sagging. The shape of an unloaded wire rope that is fixed at its ends horizontally, forms a gentle curve. A classic example of this shape is the curvature of overhead power cables between pylons. Note that no amount of line tension can ever eliminate the sag completely.

If such devices as “extenders” or “energy absorbers” are fitted at the end points, these will change length when subjected to some load and in turn, change the length of the rope thus increasing the sag angle. All such devices need to be certified by the manufacturer. Important information required from the Manufacturer includes:

Section 4.3.3.3 of SANS50795:1996 deals with the dynamic performance type test. The testing procedure is described in section 5.3.4.2 of the standard. It concludes with the statement that the data gathered during the performance test “shall be used to verify the manufacturer’s claims for the device”

In order to satisfy the requirements of SANS50795:1996, Tests need to be undertaken.

If the existing system’s components are tested and certified following the above mentioned “type tests”, then a design check by an engineer is required for the existing system or an in-situ test with a static load of 9kN (918kg mass) {as per 4.3.3.2} attached to the midpoint of the lifeline and suspended for 3 minutes must be undertaken.

Again, this assumes that only one person is attached to the lifeline at any one time.

SANS50795:1996 has been superseded in Europe by EN795:2012. One of the major changes is the complete re-write of Annex A. There is a major issue with the paragraph under clause A.5 “Class C” anchor devices in 50795:1996 dealing with pull-out tests. The offending paragraph incorrectly requires pull-out tests on anchors with a test force of 5kN for 15 seconds. It can be clearly seen in the forces listed in table 1 above, that a 5 kN load on the anchors is totally insufficient.

What about lifeline anchors set into brick walls?

Pull-out test as well as a structural “resistance tests” must be done and all brick constructed walls must be inspected and certified by a Pr Eng.

Doing conventional pull-out tests on bricks is simply testing the resistance between the anchor bolts and the single brick containing the anchor. It does not verify the wall’s ability to withstand the applied force which could cause the wall to topple over or for several bricks to be dislodged from the wall. 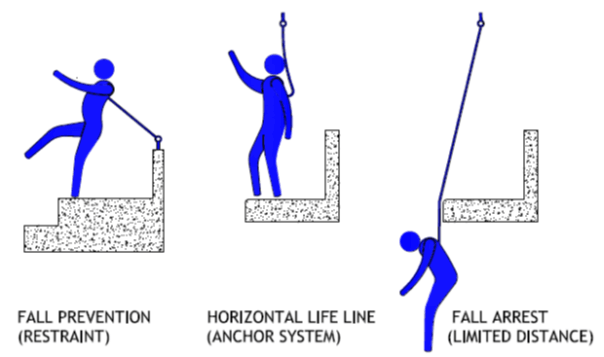 PPE for Fall Restraint vs Fall Arrest – what is the difference? Fall restraint is also known as fall prevention and... 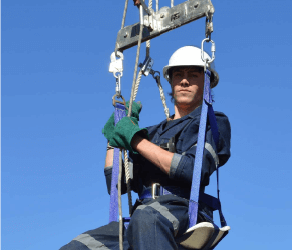 The Problem with Eyenuts as Anchor Points